A video clip of ALICE IN CHAINS performing the song “Rooster” with COMES WITH THE FALL frontman William DuVall and Ann and from HEART on March 10, 2006 at the taping of the VH1 Classic series “Decades Rock Live!” has been posted online at YouTube.com.

ALICE IN CHAINS played five songs on as part of a “Decades Rock Live!” tribute to HEART. The episode officially premiered on May 5 but the final 90-minute program only included two songs from AIC (“Would?” and “Rooster”).

Former PANTERA frontman Philip Anselmo sang two songs with the group (Would? [video] and “Them Bones”), while DuVall performed another two in addition to dueting with Ann Wilson on “Rooster”.

As previously reported, ALICE IN CHAINS will be joined on vocals by DuVall. However, surprise guest vocalists and musicians are expected to show up at each of the five U.S. dates. 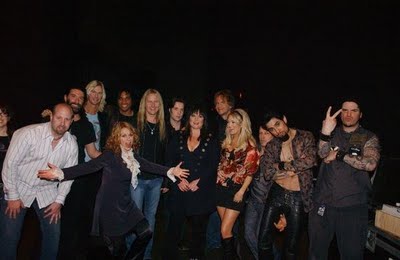 ALICE IN CHAINS: ‘Decades’ DVD/CD Box Set To Include Bonus Performances, Interview Footage – May 11, 2006 Next