Critics have long held that the heart of rock ‘n’ roll has always had a feminine side. But selling that notion to their male colleagues more than three decades ago was easier said than done for Ann and Nancy Wilson, the creative forces behind the trailblazing hard rock band Heart.

“Just because I have boobs doesn’t mean I can’t rock,” Ann Wilson says bluntly. “But it wasn’t easy back [in the mid-1970s] being taken seriously by the ‘boys club.’ We were looked at as chicks who were trying to mooch in on a good thing.”

It was never Heart’s goal to be the poster girls for women in rock ‘n’ roll, adds younger sister Nancy.

“It was obvious from the start that we weren’t like the other rock outfits out there,” she says. “We had a hard time being [accepted] by the guys in the business.”

Even after Heart had turned out hits like “Crazy On You” and “Magic Man,” the Wilsons — in separate telephone interviews from their Seattle homes — both say they had to work harder than men in order to prove themselves.

And then there was the sexual harassment they endured from “guys who couldn’t stand to see us succeed,” Ann adds.

“We had to put up with a lot of sexist remarks and slimy behavior,” she says. “That’s what led me to write [the hit song] ‘Barracuda’. A lot of my frustration at the time came out in that song.”

In spite of their success during that period, Nancy says men and women were surprised that the Wilsons could sing and play rock ‘n’ roll and still maintain their femininity.

“I always found that kind of thinking very strange,” she notes. “We could definitely be sexy on stage, but our music didn’t have to be [guy] rock or chick rock. It was just rock ‘n roll.”

It wasn’t until the 1980s that Heart was accepted by the rock establishment after hit singles like “What About Love,” “These Dreams,” “Nothin’ At All” and “Never,” all of which came from their self-titled 1985 album.

“The turning point for us was when we became commercially successful,” Ann says. “Even the staunchest members of the ‘boys club’ had to sit up and recognize the power of the dollar. So when we started selling all of those records and started doing longer tours and playing bigger [arenas], all of a sudden we were ‘stars’. But even then, we had to look more perfect and play more perfect and do longer sets than [the guys]. We still had to prove ourselves.”

Years of hard work and perseverance will pay off for the Wilsons at Trump Taj Mahal on Friday, March 10, when music channel VH1 Classic honors them during the taping of its Decades Rock Live! series. With Heart serving as the house band, artists like Dave Navarro, Rufus Wainwright, Alice In Chains and American Idol winner Carrie Underwood will pay tribute to Heart with their own interpretations of their music.

With all of that star power on one stage, Nancy Wilson, who turns 52 next Thursday, predicts Ann, 55, will steal the show.

“Wait until they hear her do ‘Rooster’ with Alice In Chains,” Nancy says of her older sister, Heart’s lead singer.

“The first time I heard her do it was a few months ago at a [Hurricane] Katrina benefit,” she adds. “We just stood backstage and were completely blown away, because she was just so over the top with it.”

Looking back on Heart’s career, Nancy Wilson, who’s married to writer and filmmaker Cameron Crowe, feels honored to be in the vanguard of women rockers. While admitting she and her sister are musical pioneers, she downplays the band’s significance in the emergence of women as serious rock artists.

If not Heart, she says, someone else would have come along to break down the barriers, like Chrissie Hynde of the Pretenders.

“Chrissie is an original, just as Heart is an original,” she says. “She would have happened without us. So would a lot of other [artists]. But it’s nice to be recognized for our contributions.”

Today, the sisters enjoy taking a break from Heart to pursue solo projects, knowing the music will be fresher whenever they decide to put the band together for an album or concert tour, both of which they’re doing this year.

“It’s fun to be in Heart,” Nancy says. “Where else can I crank up the amp to 10 and then stand next to Ann and listen to her amazing voice?” • 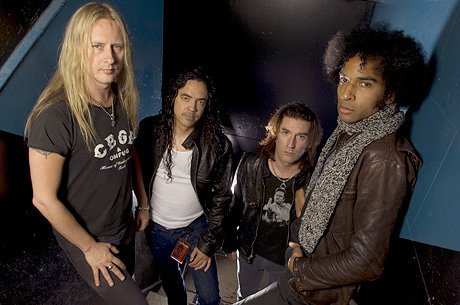 ALICE IN CHAINS: VH1 HEART Tribute Performance To Air Tonight – May 5, 2006 Next