The band Jane’s Addiction if personified would be that guy or girl you know, you know who I mean, who has all the things you covet: lots of friends, vast wealth, success with the opposite sex etc. without having any of the requisite charm or personality you feel to deserve any of it. Just replace “charm” with “actual good songs” and “personality” with… you know what? That works. I think you catch my drift.

It’s surprising because Jane’s Addiction, at a glance, have all the hallmarks of a classic rock band. There’s the snake-hipped frontman dispensing words of questionable wisdom and import in the form of Perry Farrell, Dave Navarro, the it-actually-takes-a-lot-of-effort-to-look-this-effortlessly-cool lead guitarist, the perennially interchangeable member, in this case Chris Chaney standing in for original bassist and malcontent Eric Avery and a drummer. This one is called Stephen Perkins, not that it ever matters.

And it’s not just their look; the group’s back catalogue is rife with tricks cribbed from other acts. Whether they’ve “borrowed inspiration” from their turn of the ‘90s contemporaries like on Ain’t No Right, which channels the white funk of the Red Hot Chili Peppers (whom Dave Navarro joined to record 1995’s One Hot Minute, a record that’s as value for money as its title suggests) or acts they should really know better than to copy as in the case of Mountain Song, existing solely as a 4 minute ode to the lackadaisical approach Led Zeppelin’s legal team have to trademark infringement, the honest truth is you’ve heard it all done better elsewhere.

This latest release, Live in NYC, documents the band’s 2011 show at the inauspiciously small Terminal 5 venue on the still-ongoing Theatre of the Escapists Tour. This gig, in partnership with LG, (an incidental factoid you won’t soon forget as the camera pans over the awnings largely displaying the company’s logo every few minutes) was originally billed as the world’s first user generated 3D concert film, a concept I still don’t get. People will come up with near enough anything to get in the Guinness Book of Records. Anyway, it turns out neither the Blu-ray nor the DVD presents the concert in 3D so that was a lot of head-scratching for nothing. If, by now, you haven’t already caught the slight whiff of opportunism from the corporate sponsor, or perhaps, the slightly stronger musk accompanying the fact that this DVD was recorded nearly two years ago, then this final wave of will really knock you over: this entire concert is available to watch legally on Youtube for free.

Which would be fine I guess if this product was worthy of purchase, but it’s not. With one minor exception (The only song performed here that is not present on any other live release is Irresistible Force (Met the Immovable Object) the first single from latest album The Great Escape Artist) the songs included are not only identical to 2009’s Live Voodoo DVD, but to nearly every Jane’s Addiction show since their first breakup circa 1991 and later tours of varying degrees of reunion throughout the 2000s. Putting an interview and a photo gallery on as extras does not make this warrant a home media release. 20 years on from their heyday, fans still eagerly await each new offering and continue to attend the concerts demonstrating an extraordinary level of devotion yet their idols are clearly, judging by this unapologetic cash-in, unwilling to repay their commitment. Then again this is the same band that used business nous to turn their farewell tour into the nationwide festival Lollapalooza. We shouldn’t be that surprised.

That’s not to say the performances aren’t up to scratch, hell, if they can’t play these songs by now the band really should think about packing it in. Or at least return the NME Godlike Genius Award they got in 2008. Despite the fact Perry Farrell has never had that distinctive a voice to begin with, by overcoming the heroin addiction that marred the first reunion in 1997, he is once more a lively frontman that frequently energizes the rest of the band’s bland professionalism. However, as he ages, he is unfortunately gaining more than a passing resemblance to former Manchester United Assistant Manager Carlos Queiroz. (As a side note, I spent more than half the length of the DVD obsessively trying to remember his name, so if I don’t get credit for that, at least reward my spelling it correctly).

In contrast to his bandmate, the seemingly ageless Dave Navarro is incapable of injecting any sense of wild abandon into his performances, reflected in his indifferent onstage demeanour. With virtuoso guitarists, like Steve Vai or Joe Satriani, there’s the issue that their prodigious ability makes their note-perfect renditions sound soulless. Here, Navarro’s admittedly impressive guitar histrionics fail to register any emotional connection especially during the extended solo on Three Days. Thankfully 2003’s comeback single Just Because, probably their most immediate song, has a propulsive riff that puts his skills to good use, sounding terrific.

Anyone buying this DVD expecting a theatrical performance worthy of the tour’s billing is sure to be disappointed. The trappings of the gig promise a mixture of burlesque debauchery and circus spectacle, Crazy Horse meets Cirque du Soleil if you will, yet this actually amounts to not much more than scantily-clad girls on trapezes. When pop artists like Pink, Take That and Britney have raised the bar for circus-themed performances to such a high standard, you wonder why they even bothered. The end result is even tackier than Mötley Crüe’s broadly similar Carnival of Sins tour. Yeah, tackier than Mötley Crüe, you read that right.

That Jane’s Addiction would release this subpar package and expect loyal fans to pay their hard-earned money for a product that is readily available at no cost reaches new levels of shameless deplorability. It’s ironic that of the tracks they’ve been playing for more than 20 years, one is titled Been Caught Stealing. Apparently not yet. 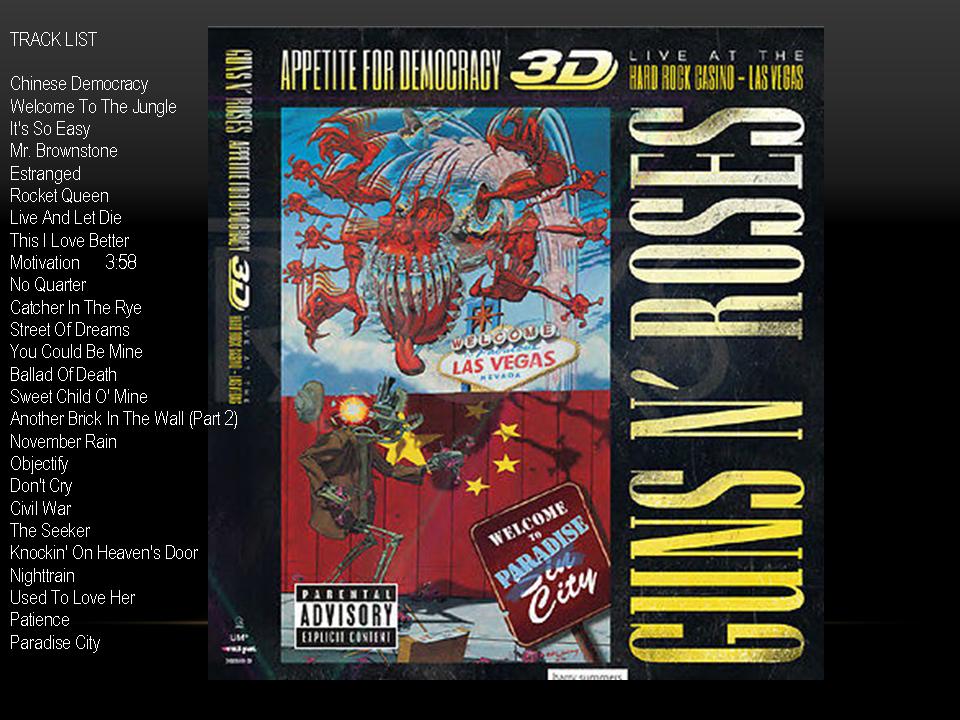