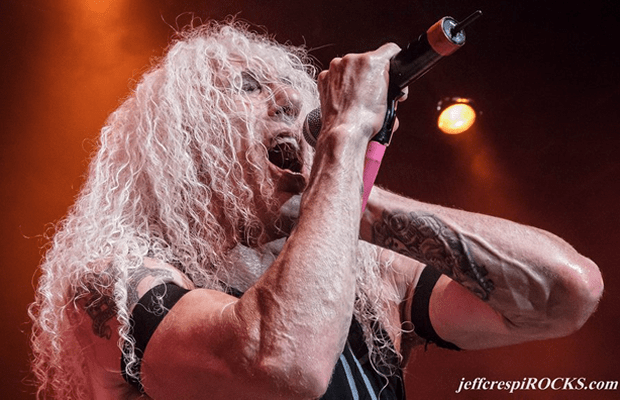 The much anticipated Metal Meltdown show featuring Great White, Skid Row, Extreme, and Twister Sister closed out May 2015 on a grand scale. The show was the first in a new series for the Hard Rock and was also filmed for a 3-D cinematic release, television broadcast, and DVD.

The venue for this never before seen event was none other than The Joint inside the Hard Rock Hotel and Casino in Las Vegas, NV and there couldn’t have been a more fitting environment.

The Joint is by far the best live venue in Vegas, and possibly the rest of the country as well. Big enough, yet still intimate, it’s an absolute perfect place for rock bands. The buzz inside the casino was reminiscent of the old school parking lot partying that always played out before the arena shows that were a staple in the 80s and 90s.

Fans lined up outside The Joint early, even though there was a lengthy seven-hour show ahead. Even the merch table had a hefty crowd, which is great news for bands, since we all know how difficult it is in the music business today, and bands rely heavily on merchandise sales while on tour.

Once inside, the crowd was alive and ready for openers Great White to take the stage. With their legal battles now behind them, the band looked and sounded just the way you’d want them to. They were the Great White that everyone knows and loves. Great sound, great energy, and fantastic set list. Nothing was missed and the guys started the evening on a high note that would last well throughout the night. The band has been touring quite a bit on the festival circuit and the Monsters of Rock cruises and are tight and professional.

After a quick set change, Skid Row was up next and they came out loud, strong, and ass kicking. This was their first US show with their new singer, former TNT vocalist, Tony Harnell, and he nailed it. The change came across as seamless. The energy was intense, the song choices crowd pleasing, and the musicianship completely on point. The only negative in the performance was an oddly timed, “I chant this…the crowd repeats” breakdown in the middle of “Monkey Business.” That song is so hardcore and intense that it really took something away from the performance to throw that curve ball in during the middle of the song. Sometimes that banter with the crowd can work, and it likely would’ve between songs or possibly in the middle of another selection. But “Monkey Business” stands on its own without needing to break it up in any way. Other than that, Skid Row was hands down amazing. Pure rock and roll, just the way we like it.

Another quick set change brought Extreme to the stage. Currently, the band is touring in support of the 25th anniversary of their hit album Pornografitti and they are performing the album in its entirety. Every Extreme fan in the audience was giddy over this. Gary Cherone alone has a highly devoted corp of fans, people that even supported his foray into the world of Van Halen that time. The band was solid and cohesive and Nuno Bettencourt’s guitar tone warm and precise. For this event, they didn’t change a thing. The band played the album perfectly and fans were excited and satisfied.

With a healthy five hours of rock behind them, the crowd showed no sense of fatigue in anticipation of headliner,Twisted Sister, to close the show. Of course, the sudden passing of drummer AJ Pero was on the minds of many. It’s unfortunate how many of our beloved musicians have been lost over the years, yet even in sadness the show must go on. In regards to Twisted Sister, superstar drummer, and longtime Twisted Sister fan, Mike Portnoy (Dream Theater, Adrenaline Mob, Winery Dogs) stepped in to take the throne. There was no doubt that Portnoy could do the late Pero justice and of course he proved it.

Twisted Sister is the epitome of rock and roll. Dee Snyder, with the blond curls flowing and a simply stated “Fuck It” in bold across his T-shirt, oozes the rock and roll attitude in which the rock community thrives on. There wasn’t a moment in the performance that was anything less than spectacular. With a 14-song set list and two more for the encore, Twisted Sister left this completely rocked out crowd breathless. A seven-hour show can be daunting, even for the most hardcore fan, but wow was it worth it.

This is Twisted Sisters last tour and it’s absolutely essential that you see it.

All in all this was an epic undertaking of a show and it went off without a hitch. If you were unable to be in Vegas and see it live, most definitely see the cinematic release and TV airings that are planned. And keep your eye out for the next big metal event that The Joint has in the works because if it’s anything like this one, you’d better get ready to book a flight.