This year in the UK, Queen Elizabeth II’s Diamond Jubilee is bringing together millions of her subjects (and plenty of outsiders) to commemorate her time on the throne. In America, we don’t have an actual monarchy; we have rock stars, and there are none more vital to understanding our modern musical heritage than the Beach Boys and their own Crown Prince, Brian Wilson.

For the first time since Wilson stopped performing with the group in 1965 in order to focus on composing and recording (and dropping acid), he has joined his mates for a full-fledged tour, celebrating 50 years of their music. Saturday night’s show also marked the first time since 1967 that the Beach Boys have performed at the Hollywood Bowl. For a band so acutely inspired by and connected to Southern California, it was long overdue.

They began their marathon performance with “Do It Again,” a paean to the old days, pretty girls and chilling at the beach. A mid-tempo tune replete with handclaps and vocal harmonies, it was a pleasant way to ease into the set. “Catch a Wave” kicked things into gear, with a classic rock ‘n’ roll backbeat that sounded straight out of a Kennedy-era time capsule.

“You’re all sitting down, and we’re playing up-tempo songs,” said Mike Love. “Maybe if we play some slow ones, you’ll get up.” And get up many did, for “Surfer Girl.” The 1963 classic still packs an emotional wallop, and audience members of a certain age swayed back and forth in time.

The Beach Boys acknowledged their historical debt to Phil Spector and his groundbreaking wall of sound with “Then I Kissed Her,” their cover of the Crystals’ “Then He Kissed Me.” The track has an undeniable melody no matter who sings it, and the still-vital Al Jardine did a commendable job.

“Be True to Your School” is, let’s face it, one of the squarest sentiments ever espoused by a musician. However, much of the Beach Boys’ charm lies in that sort of clean-cut and forthright attitude. In a nod to the locale, the screen behind the band displayed the names and logos of local universities like USC, UCLA and Pepperdine. “Don’t Worry, Baby” was and is a stunner, a perfect encapsulation of Wilson’s burgeoning lyrical and melodic sophistication in the mid-’60s. Longtime sideman Jeff Foskett handled lead vocal duties, giving the band a bit of a break, while also highlighting their knack for finding prodigiously talented musicians to back them up.

The first set concluded with a Mike Love-led four-song “car suite.” Often derided as the corniest material of the group’s early career, the tracks, especially “I Get Around,” nevertheless sounded fresh after nearly half a century. After a well-deserved breather, the group of 15 (five Beach Boys and ten backing musicians, including L.A.’s fantastic, Brian Wilson-approved Wondermints) swelled even further, with the addition of California Saga, a gaggle of group members’ children, including Carnie and Wendy Wilson of Wilson Phillips.

They pitched in on “Friends,” from the eponymous 1968 album, and “California Saga: California.” Love constantly plugged the group’s new album That’s Why God Made the Radio. Its title track reaches for a sort of seaside gospel vibe, but winds up sounding more like Christian rock for rich beach bums.

That other God song from the Beach Boys canon was far more successful. “God Only Knows” was a moving and gorgeous tribute to the late Carl Wilson, whose heavenly upper-register vocals graced the original track. Likewise, “Forever” celebrated the memory of Dennis Wilson, creator of the forgotten classic album Pacific Ocean Blue. The ensuing double shot of “Good Vibrations” and “California Girls” proved once again that some songs are so great you cannot fuck them up. They closed the second set with “Surfin’ USA,” an ode to the eternal teenage desires to get out of school, gather up your friends and find some slightly-dangerous-but-still-wholesome fun.

The encore was a relatively quick three songs. “Kokomo” was awful. Love’s usually-youthful voice was faltering noticeably by the end of the night, and Brian Wilson (who had absolutely nothing to do with the original recording of this track) was pretty much just set dressing.

“Barbara Ann” was enjoyable, and the final “Fun Fun Fun” evoked the innocence of youthful rebellion and a time when having a car in SoCal meant having freedom, rather than fighting strangers for parking spaces. That time was less than perfect, but it was crucial to the formation of the mystique that L.A. possesses, and the allure it holds for transplants like myself.

Personal Bias: I’ve seen “the Beach Boys” once before, but It was basically Mike Love and his golf buddies.

The Crowd: White people of all ages.

Overheard in the Crowd: “Needs more Stamos,” a twentysomething guy said during “Forever.”

Random Notebook Dump: I was directly in front of Paul Stanley of KISS in the will call line.

See also: A Tour Of Beach Boys’ Haunts In Their Hometown Of Hawthorne, California – With Pictures

Part I:
Do It Again
Little Honda
Catch a Wave
Hawaii
Don’t Back Down
Surfin’ Safari
Surfer Girl
Please Let Me Wonder
Marcella
This Whole World
Then I Kissed Her (The Crystals cover)
Disney Girls
In My Room
Kiss Me, Baby
Isn’t It Time
Why Do Fools Fall in Love (Frankie Lymon & the Teenagers cover)
When I Grow Up (to Be a Man)
Cotton Fields (Lead Belly cover)
Be True to Your School
Ballad of Ole’ Betsy
Don’t Worry, Baby
Little Deuce Coupe
409
Shut Down
I Get Around

Part II:
Add Some Music to Your Day
Friends
All This Is That
California Saga: California
Sloop John B
Wouldn’t It Be Nice
I Just Wasn’t Made for These Times
Sail On, Sailor
Heroes and Villains
That’s Why God Made the Radio
Forever
God Only Knows
Good Vibrations
California Girls
Help Me, Rhonda
Rock and Roll Music (Chuck Berry cover)
Do You Wanna Dance? (Bobby Freeman cover)
Surfin’ USA

Live: The Beach Boys at the Hollywood Bowl Previous 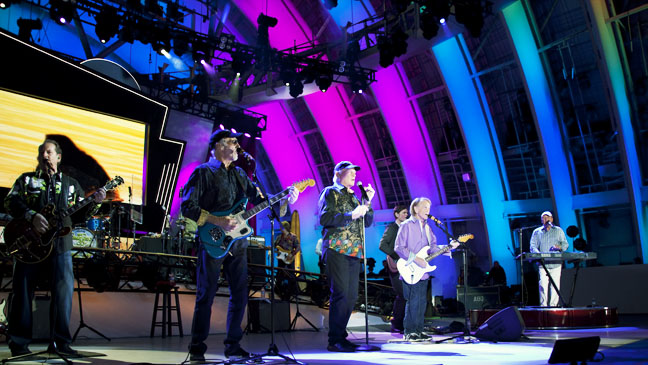 The Beach Boys at Hollywood Bowl: Concert Review Next